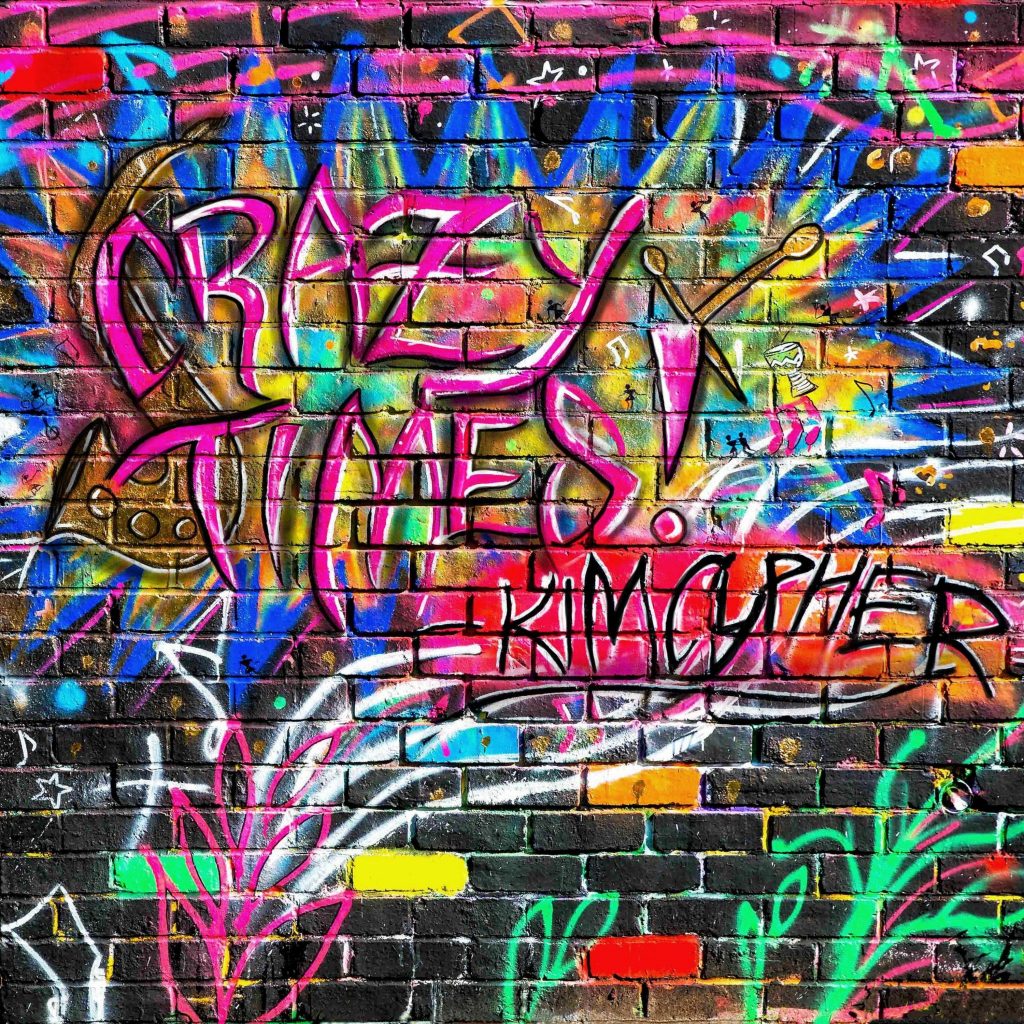 “A timepiece to remember these crazy times.”

“Absolutely fabulous combo of colour, energy, optimism, fun and first-class, high-octane music. What’s also fab is the story behind it.”

“A celebration of community.”

“WOW, I love it! It has already found a place in my personal collection.”

“My favourite Kim Cypher track so far. On my playlist now.”

“The carnivalesque production encapsulates the strength, vibrance and spirit of human connection in the face of adversity.”

“In the face of growing uncertainty surrounding the COVID-19 pandemic and what future lockdown might mean for our communities, the unshakable Crazy Times community spirit lives on.”

Inspired by lockdown; Composed, performed and produced by Mike and Kim Cypher; Demonstrating the power of music to bring people together, raise spirits and create a moment of escapism in these crazy times.

Crazy times indeed…and so I am pleased to announce the release of my lockdown inspired, original track ‘Crazy Times’ – an expression of the confusion and frustration as the world was plunged into lockdown during the Covid-19 pandemic.

“The music will play on in these crazy times…”

The story behind ‘Crazy Times’ and how the project evolved is a real testament to the incredible kindness in the world. It also celebrates the fact that the music will play on, something all musicians feel incredibly passionate about right now. So, ‘Crazy Times’ has grown into an amazing community project and the video captures a very special moment in life that will be cherished forever.

As the world was plunged into lockdown, there was an overwhelming sense of confusion as everybody tried to make sense of the situation and work out how this global pandemic would affect their lives. I think it’s fair to say that we all went into shock. As musicians, instantly all our gigs were cancelled, our livelihood was wiped out and our sense of identity was put into question. We were overwhelmed with sadness for the world and for everyone. Within days we realised we needed to come up with a way to cope with the situation, a way for us to cope and a way to help others cope. We knew this would involve a way of keeping connected with everyone…and so our daily ‘live’ Facebook show was born!

Every weekday at 11.00am we would go ‘live’ from our home for approx 1 hour. Everyone was welcome to join us for some light-hearted chat over a cuppa and with some fun and banter thrown in for good measure. It started off as a bit of fun, but we had no idea how this show would grow and grow to include some daily features including Mike’s jokes, what’s in the box, ‘live’ music, special guests and with a whole community of followers tuning in each day to join the chat. It was pretty special and for 11 weeks it helped us all get through the darkest days of lockdown.

It was during this time we composed ‘Crazy Times’ and were coping with the frustration of accepting it would not be possible to produce this original piece of music due to a lack of income.

As the world started to get back to some normality, we made the tough decision to conclude our daily shows to allow more time to concentrate on creating some new musical projects and to plan our future going forward. At this point, we had no idea the incredible impact our shows had on all the people who had tuned in each day.

Shortly after our final show, something incredible happened! Mike and I picked up our daily post as normal, but we were baffled by a large envelope addressed to us both. As we opened it and pulled out a large card we were covered in a trail of sparkly gold stars that fell from the envelope. Whatever could this be? On reading the message in the card we were both overwhelmed with emotion…

“Your daily shows kept us smiling, and we wanted to send you both a HUGE THANK YOU!! Check your bank account for a little something that we all hope will help you in these difficult times. We can’t wait to come and see you play live again and enjoy laughter and fun times!”

The card also had a quote:

So, after wiping away our emotional tears, we decided we’d like to use this generous gift towards enabling us to professionally record and produce the audio track ‘Crazy Times’ to mark this wonderful community which had evolved during lockdown.

The track is now available on Bandcamp (ahead of official release on all platforms on 20th November 2020) as a result of that amazing kindness.

However, this is not where the ‘Crazy Times’ project finishes, oh no!

In true Mike and Kim Cypher style, a project never stays small and compact. Excitement kicks in and projects just keep growing and growing! ‘Crazy Times’ is no exception to this…

So, next up was an EPIC video shoot to capture the true community spirit behind the track and to feature some of the amazing people who had enabled the track to be created. This part of the project was solely funded by myself and Mike and so any financial contributions received here to purchase the track will be very gratefully received. You can purchase the track on Bandcamp for £1.99 but you can contribute more if you’d like to help fund the project.

The video is due for release on 20th November and is a true example of the power of music to bring people together, raise spirits and create a moment of escapism in these crazy times! We’d love to hear your comments about the video on YouTube when it releases.

Our thanks to videographer Leigh Tarrant of ‘Skooch Media’ for filming the video and for two fabulous, fun-filled days of video editing (and a lovely curry – thank you Leigh and Jane!)

Special thanks to artist Jussara Nazaré for creating an amazing piece of ‘Crazy Times’ wall art which features in the video and is also the track cover art.

Continued thanks to our good friend and supporter Ron Milsom of ‘Ron Milsom Photography’ who photographed the wall art for the track cover and whose ‘official’ photos from the video shoot will be released soon!

Plus, BIG thanks to Sarah Cross of ‘MYVOS’ for bringing my crazy outfit idea to life, Barry Benham for wowing us all with his Harley Davidson motorbike, Juanjo Lopez Vidal for his amazing trikke riding skills (as well as his audio recording skills for the track and video soundtrack), Paul Healey and the Cheltenham Salsa Squad for superb dancing, all my helpers and all the incredible people who turned up on the day to feature in the video, Cheltenham Borough Council for all their support, Waitrose Cheltenham for allowing use of their car park and Cheltenham Paint Festival artists for the stunning location backdrop at the tunnels on the Honeybourne line in Cheltenham.

Together we will get through this.

The music will play on in these crazy times xx